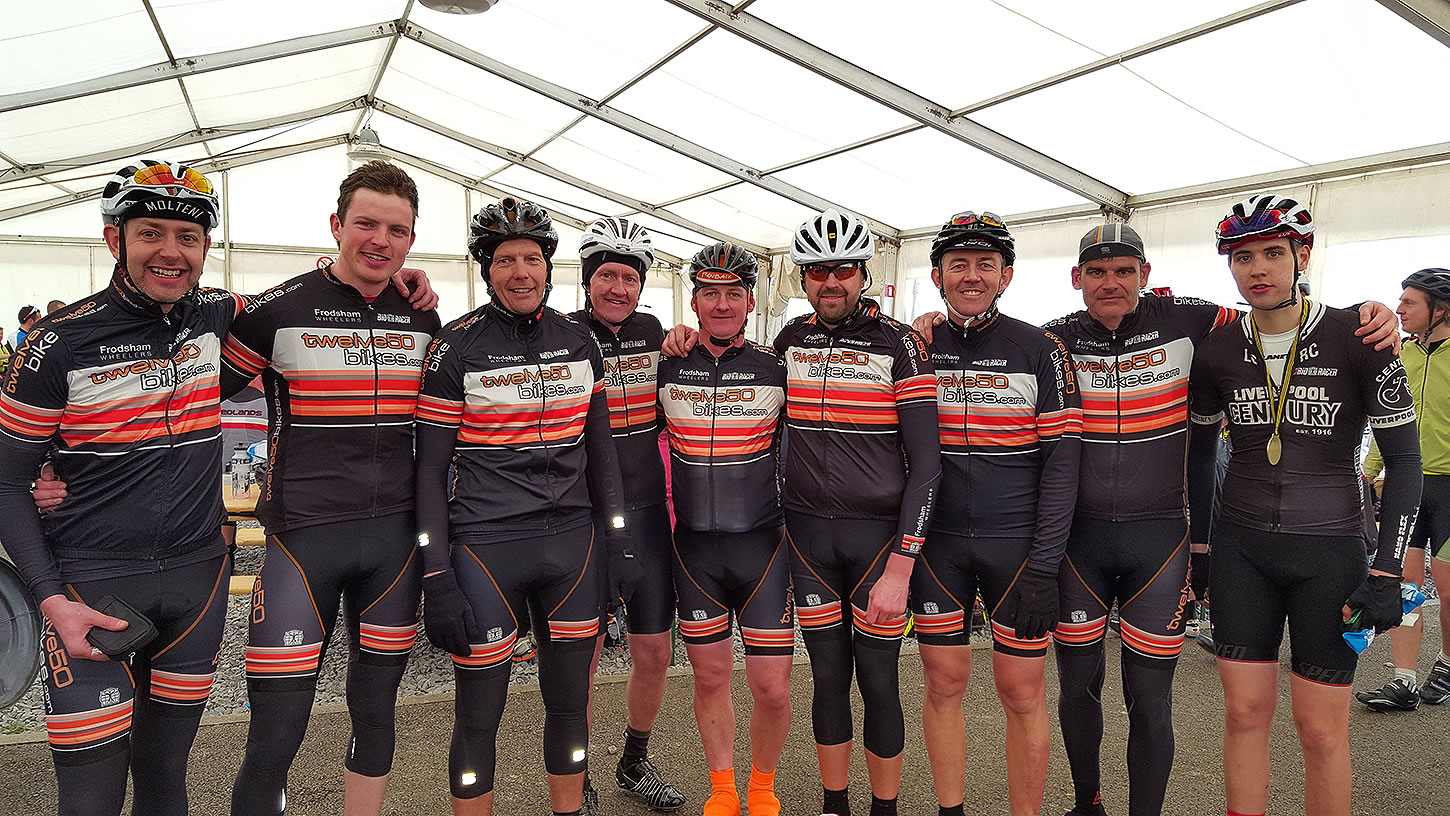 The Ultimate, for some in Cycling, the Famous De Ronde, Ronde van Vlaanderen RVV or Tour of Flanders!

Early morning 1st April, 8 Wheelers and a friend of the club, Andy Brookfield, departed the local surroundings in 3 separate cars. Destination Gent via the cycling Mecca of Oudenaarde. Reason: the ultimate (for some) in cycling the famous De Ronde, Ronde van Vlaanderen, RVV or Tour of Flanders!

A quick text to the Runcorn lot to state the M1 was closed meant that we all ventured down the same route, bumping into each other at various places meant it was a largely uneventful and speedy journey. A couple of wrong turns here and there never hurt anyone!

Arriving in Oudenaarde early afternoon for registration you knew you were somewhere special – the atmosphere was electric – bikes galore and some lean and mean looking cyclists. We spoke to a guy on a £5k bike who said this was his cobble only bike – really…?

Onto Gent and checking into the various abodes, we planned to meet up and have some pre-ride carbs of both the liquid and solid variety. We all did pre-ride bike checks before setting off however Aidan noticed a problem with his freehub. In stepped Smasher Hartley to patch up the hub ready for the ride in the morning.

We met up in the first of Marco Pierre Hewitson’s recommended eateries and it didn’t disappoint. Sufficiently filled and watered we headed for home getting a few photo’s along the way. Gent is a truly lovely city so if you ever get the chance to visit then take it.

The plan was for us to meet at the meeting point at 7:15. Forecast was cloudy, dry and spring temperature so kit selection was simple for a change. All was going to plan and we were out the door when I noticed a problem with my freehub – like my wheel wouldn’t turn – how? After a tangible panic and flap, off came the wheel and out came the tools. A little fettling later and we were off but now we were late…

We called for the Runcorn lot (with a ropey feeling Smasher) and headed for the rendezvous. We had planned to take the scenic route down the river however due to lateness a change of plan and the N60 beckoned with Dean putting out some watts we got there very sharpish. An hour later we arrived at the start line, caught our breath and headed out. The theme of the day was for people to ride at their own pace and meet up at the feed stations what awaited us was 15 ‘Hellingens‘ some of cobbled and some of them not with gradients between 10% and 22%.

The first one – the smooth Wolvenberg – hit us after 9.5km and wasn’t too bad but what we were all gearing up for was the first cobbled climb, the Molenberg. A 0.5km tight climb topping out at 14.2% however it wasn’t long before we hit ‘flat‘ cobbles – lots of them – where did these come from? Everyone who talks about RVV mentions cobbled climbs but don’t be fooled there are flat sections and downhill sections – plenty of them. It was on one of these flat sections that we saw our first bottle out (Mark) and first off of the day as two guys went down. The fallen riders then conspired to try and take out Alan ‘Orminator‘ Orme but after a number of increasingly louder shouts of ‘left, left, left‘ disaster was avoided and he just managed to avoid them thankfully. The Molenberg arrived and we all safely navigated up and headed to the first refreshment stop. 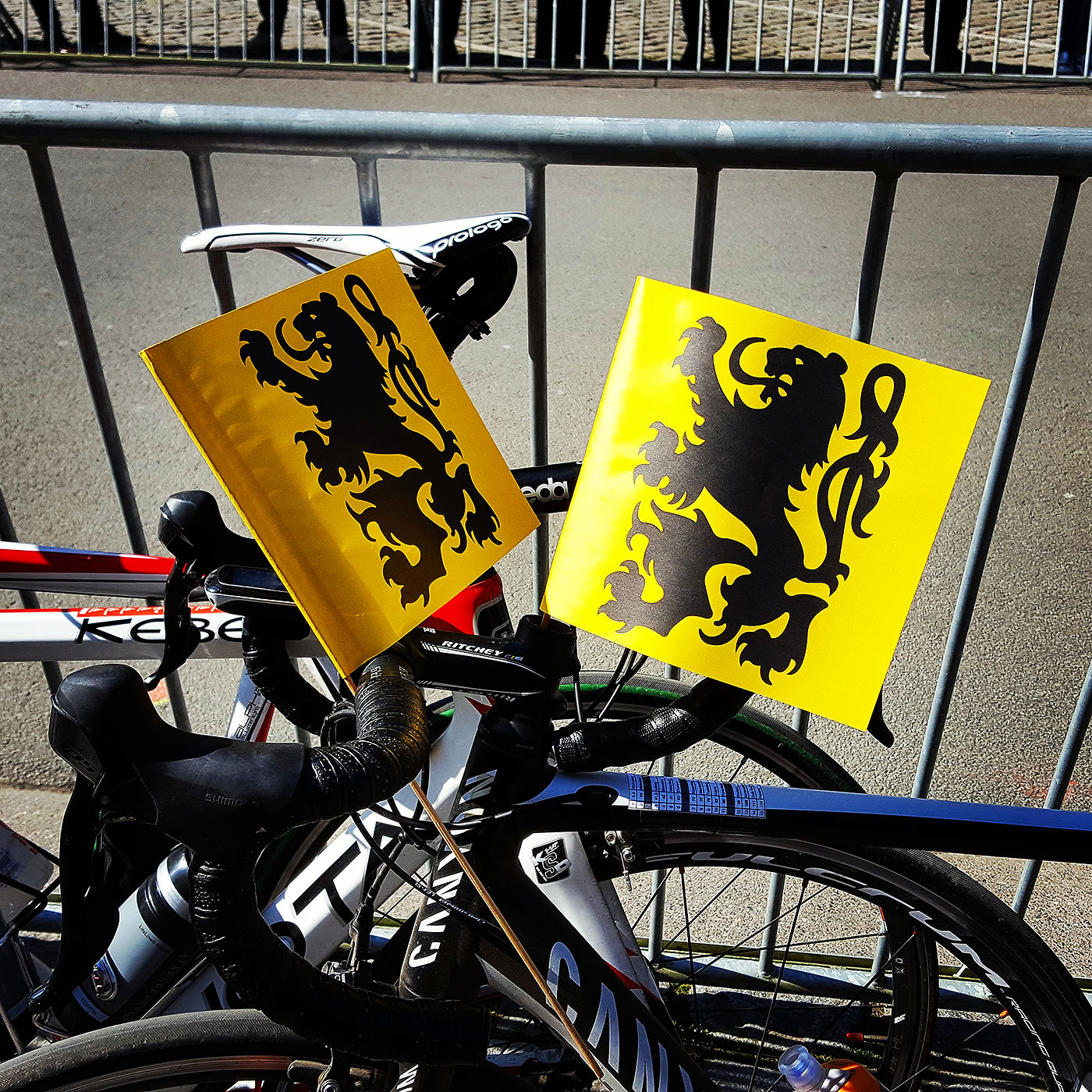 All fed and watered we then set off for another 4 Hellingen with some famous names of Valkenberg and Eikenberg again all were safely navigated. Refreshment stop two was upon us at 69km. 4km after this was the notorious Koppenberg with its narrow 22% incline. We all set off together and as we headed towards it – we turned left and saw it. What is that we asked each other? What it was was hundreds of cyclists walking up it! Absolutely no chance of riding it. Smasher was visibly upset at the thought of not being able to smash it! Unclipped and with the masses we walked it. Whether we all would have got up it is the unanswered question (I’m sure a few would have) as it was muddy and quite slippery.

Two bergs later and we were on the Taaienberg aka the ‘Boonenberg’ however not before a fast cobbled descent. Plenty of bottles and tool packs lay on the ground – trying to avoid them at speed is scary but Baz thought it was ace! We entered the K section – 4 Hellingens all beginning with K separated by the final feed stop. As Matthew ‘Mat Nav‘ Burke and I crested the final one cobbled one before the Oude Kwaremont, Karneemelkbeekstraat, there was a Red Bull tent giving away handing out cans like they do with bidons for the pros so you had to partake obviously!

After a little up and down we arrived at the foot of the Oude Kwaremont where we ground to a halt for over 20 mins. Obviously we didn’t know the reason and only found out later so we set none the wiser in eagerness to climb one of the most iconic stretches of the RVV. All safely navigated and sight of two parents going up it with two children on tandems was ‘awesome’. After the ‘OK’ came the Paterberg where the approach was slow due to the 90 degree turn onto it. Again this was going to be a feat of skill getting up this as there were a few walkers. At about half way up two riders in front of me went down and that put an end to my effort and it was a similar story for all apart from Baz and Dean – chapeau sirs!

With the hills out of the way the next 10km was a smash fest into Oudenaarde across the finish line and into the registration area. Goodies obtained, drinks, beers and hamburgers consumed we headed back to the digs to get ready for the evening out. Baz, Matt and Andy headed for their digs which left the Runcorners, me and Mark trying to find ours. At this point we had the only off of the weekend where Mark, trying to bunny hop one of the tram tracks, actually bunny hopped into the tram track – some going that. Mark dusted himself off and still lost! We bumped into Mat Nav (trying to get the 200km in) who then ably guided us to our digs!

Saturday evening was burgers and beer again – a Marco Pierre Hewitson selection and they were quality burgers and Belgian beer is so nice.
Sunday morning saw another smash fest into Oudenaarde led by Dean (were we ever going to do the scenic route?) However there were some sore heads amongst us but I’ll leave that for people to tell…

We got to a place right on the main road just in time to grab some empty seats at an Italian place, ordered coffee and pizza then watched the pro’s come through. After climbing the steepest climb of the weekend – the stairs in the Italian – we proceeded to Oude Kwaremont. After a bit of shenanigans – ‘you can walk on the road but your bike can’t’ – what ??? we managed to get to a couple of great places on the climb where we settled in for the day.

It must have been a good place as Luca Paolini decided to join in the fun and asked for a selfie with the Frodsham Wheelers! We also bumped into Roy Forster’s mate – small world this cycling world. The ladies came through, the comp winners came through and gents came through twice all in 20 degree sunshine with beer and burgers – does life get any better?

We smashed it back to Oudenaarde led out initially by Matt arriving just after the finish and mingled with the pro’s as they came back to the team buses. At this point the Runcorners left and headed back home to England whilst the remainder of us kept mingling before finally heading on the scenic river route back to Gent. It was supposed to be a twiddle but Baz was obviously thirsty for a Belgian beer. We were joined by an ex-pro speed skater on roller skis who drafted us for a while and turned out he ran a hotel with Stijn Vandenbergh! Check out Andy Brookie’s video on FB. 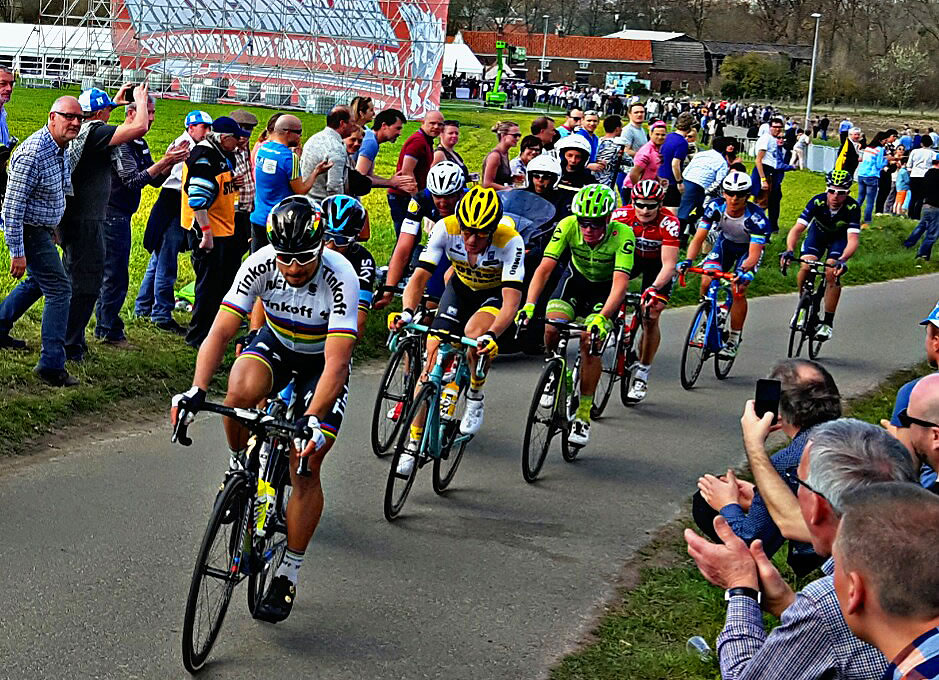 Another night on the town beckoned and we found a place that did all you can eat ribs – so some had to have a go before heading back for an earlyish night ahead of the journey home.

As Baz said initially ‘if Carlsberg did bike rides‘ but I’ll extend and say ‘if Carlsberg did bike weekends‘ then, for me, this would be it. It was an experience that I’ll never forget. Thanks to Wheelers: Mark Hewitson, Baz James, Matthew Burke, Aidan Warder, Dean Smith, Gary Hartley, Alan Orme and friend of the club Andy Brookfield for the memories, the company and the laughs.

Belgium is the supposed ‘home‘ of cycling and you can see why. It has the infrastructure – smooth roads, purpose bike lanes and the drivers stop to let cyclists cross the road – really! If you ever have the chance then I would recommend that you do this – it is a must.

So the final question is De Ronde an Epic? For me, nah, it’s a Monument! And they don’t come bigger than that…